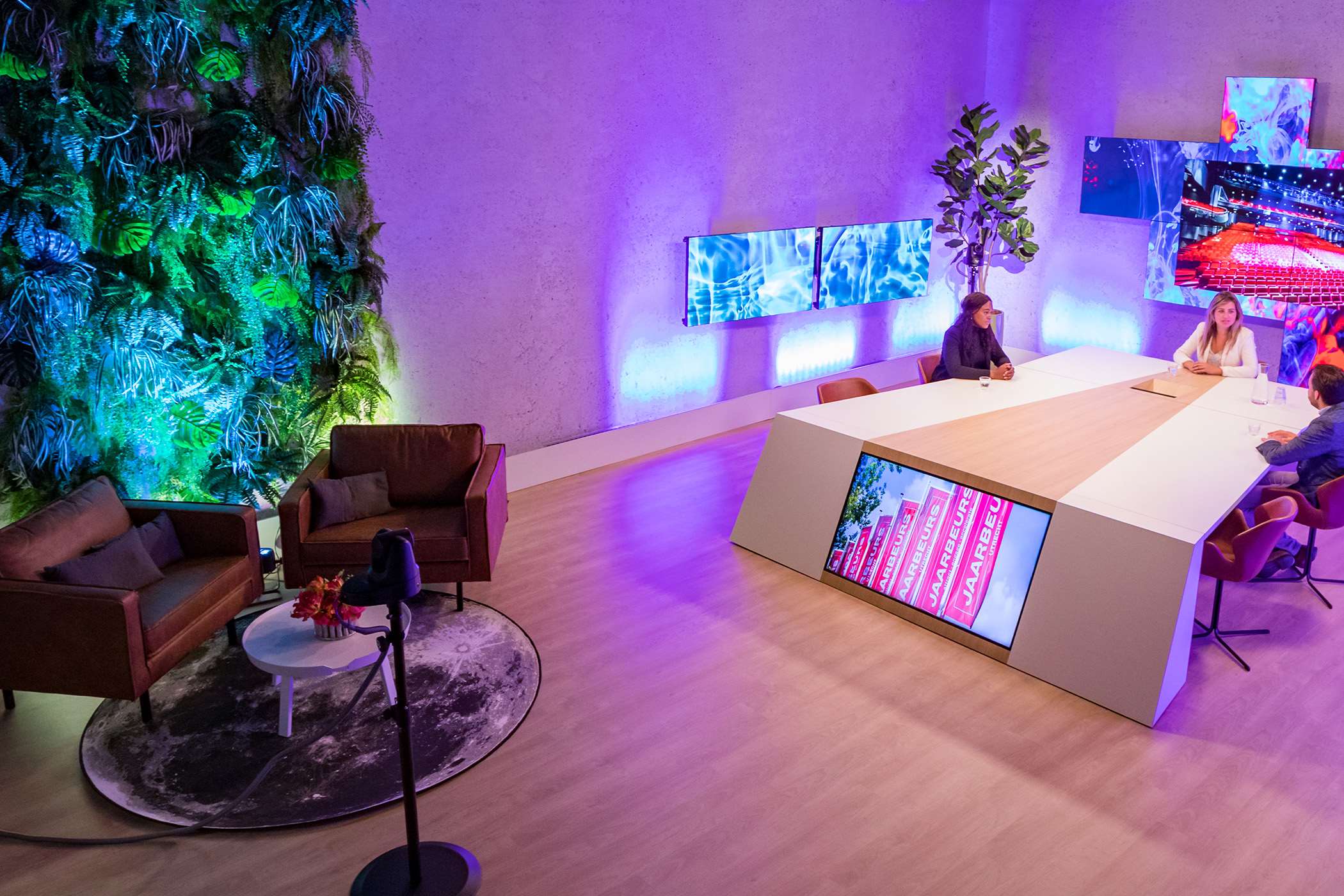 ‘Reflecting on a challenging period’

The Supervisory Board can look back on a demanding period at Jaarbeurs, in which its members also had to get down to work themselves. Despite Jaarbeurs in Utrecht only being able to open for a few months in 2021, our largest trade fair (the Trade Fair for Innovative Livestock Farming or “VIV” for the agricultural sector in Thailand) having to be postponed to 2022, and only the activities in China contributing positively to the result, the Supervisory Board had to start looking for a suitable successor for the CEO Albert Arp in the fourth quarter.

Albert Arp transferred from the healthcare sector to Jaarbeurs at the beginning of 2016 and successfully took our company on to its next phase. The Supervisory Board would have been happy to see him giving further shape in the coming years to the developments he started, but the healthcare sector ultimately drew the long straw. He has been back in that sector since 1 January 2022, as CEO of Cardiology Centers Netherlands.

It is no coincidence that Jaarbeurs has started to assist and facilitate the healthcare sector more in recent years, for example through the Dutch Health Hub, and it will continue to do so. A good CEO sets up the organisation in such a way that important new initiatives do not depend on their continued leadership, and Albert Arp did just that. The same goes for developments at Jaarbeurs with themes such as digitalisation, sustainability and “De Nieuwe Jaarbeurs” – these will remain relevant and receive attention.

The Supervisory Board would therefore like to express its particular thanks in this report to Albert Arp for his excellent leadership of the organisation for nearly six years.

After a thorough selection process, the recruitment of a new CEO has led to the appointment of Jeroen van Hooff as of 1 July 2022; at the time of writing, he is still CEO of Easyfairs Netherlands. Easyfairs Netherlands is one of Jaarbeurs’ customers, as well as a competitor. Appointments like this are therefore delicate matters, particularly at a time when the sector is struggling. We are pleased and grateful that it proved possible to arrange this after discussions with Easyfairs and we are looking forward to his arrival. Prior to his appointment as CEO of Easyfairs Netherlands in 2017, Jeroen held various management positions at Manpower and Randstad.

In 2021, the Supervisory Board also acted as a sounding board for the internal appointment of Heiko Stutzinger as COO. After ten years working in a broad range of consultancy roles, Heiko joined our industry colleagues Messe Düsseldorf in 2008 for whom he also had management roles in Asia from 2015, through to his move to Jaarbeurs (VNU Asia Pacific) in early 2019.

In October 2021, the Board also discussed with the CFO Franka Morssink whether she would take over the CEO role for the interim period – until Jeroen van Hooff arrives – and searched for and appointed a new Supervisory Board member, Carla Moonen, early in 2022.

The latter appointment was related to the retirement of the vice-chair of the Supervisory Board, Pamela Boumeester, at the end of 2021. In recent years, the Supervisory Board asked her several times to remain a Board member, even though her second term had long expired. After eleven years, that came to an end. Pamela Boumeester not only brought experience and sagacity to our dialogues, she was also the central force for innovation in recent years because (as chair of the Appointments Committee) she was behind the hiring of Albert Arp in 2016 and subsequently all members of the Supervisory Board. Reason enough for a heartfelt thank-you!

In appointing Carla Moonen, we are fulfilling our wishes not only to acquire an experienced Supervisory Board member, but also to further reinforce our diversity. None of the other Board members has experience in government or politics. We are therefore also very pleased with her arrival in the context of the broader social role that Jaarbeurs has and wants to play.

Franka Morssink announced in March 2022 that she has accepted a fantastic job as a member of the Executive Board at the care facility Philadelphia as of 1 July 2022, for which she undoubtedly deserves our congratulations. Although it has not come at a very convenient moment for Jaarbeurs, the Supervisory Board is overwhelmingly grateful for her major contributions over the past five to six years and is delighted that she will be devoting herself and her talents and drive to a wonderful social care organisation.

The Supervisory Board was fortunate to be able to appoint a highly experienced successor quickly as CFO: Pascal van Gool, who will start on 1 June 2022. Pascal worked in various financial positions for Dutch Railways, KLM and others before becoming CFO of VolkerRail Nederland in 2017. In particular, his experience with very large construction projects and their financing will be a welcome addition for Jaarbeurs.

Waiting three months longer to reopen was annoying, but being allowed to reopen after a long wait and then having to close again soon afterwards was a genuinely onerous setback for all concerned. Jaarbeurs may have chosen not to waste energy complaining, but that does not mean that our people have not felt what has commonly been expressed from within the events, hospitality and cultural sectors. Jaarbeurs had to lay people off in 2020 and when it reopened after the summer in 2021, it was very difficult to get fully staffed again. This issue will reappear even more intensely in 2022. Jaarbeurs will have to ask exhibitors and visitors to be understanding in advance, and in the meantime use all its creativity to tackle the problem.

The largest trade fair for Jaarbeurs is the Trade Fair for Innovative Livestock Farming (VIV) in Thailand. It could not be held in 2021, which led to a loss-making year. Fortunately, our joint venture partner in Thailand is a very solid company (TCC Group), so the (modest) loss could be borne together by providing a loan to the joint venture. Such a loan is subject to approval by the Jaarbeurs Supervisory Board, which did indeed approve it.

Rather more activities were possible in 2021 in China, although it was not a full year there either. China’s result in 2021 was positive and specific attention from the Supervisory Board was not required. The Supervisory Board did ask Albert Arp to stay on as non-executive chairman of VNU Exhibitions Asia during 2022, after his departure as Jaarbeurs CEO, to ensure the continuity of contacts and information flows.

Jaarbeurs made a net loss of €5.6 million in 2021 (the net loss in 2020 was €12.5 million). Obviously, the liquidity and solvency of Jaarbeurs will receive extra attention from the Supervisory Board over the coming years. Fortunately, Jaarbeurs has a good capital position and the losses of 2020 and 2021 can be absorbed with no difficulty. However, risk management benefits from looking ahead – a long way ahead – and so the Supervisory Board wholeheartedly backed the management when starting talks with the banks about a what-if scenario for an even longer-term closure caused by coronavirus. This led to an additional credit facility from Rabobank, which will not be needed in 2022 but could ultimately come in useful if the coronavirus scenario gets very grim.

The financing of the plans for new halls in Utrecht, De Nieuwe Jaarbeurs, has not been made any easier, of course. The Supervisory Board also believes that Jaarbeurs should focus primarily on how things can be done, rather than on why some things can’t be done, although without losing sight of the risks. Compared to the 2019 calculations, there is substantially less funding capacity available in-house; it is also generally known that construction costs are currently rising sharply and interest rates are going up. That is an unfortunate pincer movement – it will take a lot of ingenuity to find a responsible way of realising De Nieuwe Jaarbeurs.

The above is an overview of the key issues that the Supervisory Board dealt with in 2021. These and the more usual topics were addressed in five regular meetings and several shorter video calls by the Supervisory Board, four meetings of the Audit & Risk Committee, several contacts by telephone between the CEO and/or CFO and various individual members of the Board, and several sessions with candidates for the positions mentioned.

The Executive Board prepared the annual report, including the 2021 financial statements, for which Deloitte issued an unqualified audit opinion. The Supervisory Board:

The Supervisory Board is looking forward confidently, with curiosity and pleasure, to developments in 2022 and would like to thank all its customers, the City of Utrecht, the collaborative partners, the staff and the Executive Board for their efforts and support for Jaarbeurs.

The Jaarbeurs Supervisory Board
25 May 2022

Share:
Previous Notes on the financial year
Next Members of the Boards